Group B Streptococcal (GBS) is the leading cause of life-threatening infections in newborns.

Colonization of pregnant women with GBS may lead to adverse pregnancy outcomes such as late abortions, stillbirths, and preterm delivery. Colonization may also lead to life-threatening infections in newborns for the first 3 months of life, causing pneumonia, septicemia and meningitis, which may lead to death or life-long disability 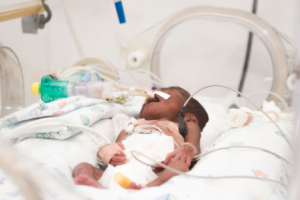 GBS is responsible for 50% of life-threatening infections in newborns and affects 0.5-3 in 1,000 such babies, depending on the geographical region. At any given time, some 15-25% of women are spontaneously colonized with GBS, and they run the risk of transmitting the bacteria both to their child in the womb, during birth and during the first months of life. GBS infection in the unborn child may lead to premature delivery or stillbirth, and GBS infection in the newborn child may result in sepsis, pneumonia or meningitis, all of which carry a significant risk of severe morbidity, long-term disability or death. Annually, GBS is responsible for some 320,000 cases of neonatal invasive disease, 60,000 stillbirths, 3,500,000 preterm deliveries, and 10,000 babies suffering from long-term neurological damage world-wide.

Current GBS intervention, involving antibiotic prophylaxis during childbirth (known as intra-partum antibiotic prophylaxis or IAP) in women colonized with GBS late in pregnancy or otherwise at risk of transmitting the bacteria to the newborn. The introduction of IAP, has reduced the incidence of Early Onset Disease (EOD) occurring within the first 6 days of life by some 80% since its introduction in year 2000. However,

Learn more about the product pipeline
We use cookies on our website to give you the most relevant experience by remembering your preferences and repeat visits. By clicking “Accept”, you consent to the use of ALL the cookies.
Cookie settingsACCEPT
Manage consent

This website uses cookies to improve your experience while you navigate through the website. Out of these, the cookies that are categorized as necessary are stored on your browser as they are essential for the working of basic functionalities of the website. We also use third-party cookies that help us analyze and understand how you use this website. These cookies will be stored in your browser only with your consent. You also have the option to opt-out of these cookies. But opting out of some of these cookies may affect your browsing experience.
Necessary Always Enabled
Necessary cookies are absolutely essential for the website to function properly. These cookies ensure basic functionalities and security features of the website, anonymously.
Functional
Functional cookies help to perform certain functionalities like sharing the content of the website on social media platforms, collect feedbacks, and other third-party features.
Performance
Performance cookies are used to understand and analyze the key performance indexes of the website which helps in delivering a better user experience for the visitors.
Analytics
Analytical cookies are used to understand how visitors interact with the website. These cookies help provide information on metrics the number of visitors, bounce rate, traffic source, etc.
Advertisement
Advertisement cookies are used to provide visitors with relevant ads and marketing campaigns. These cookies track visitors across websites and collect information to provide customized ads.
Others
Other uncategorized cookies are those that are being analyzed and have not been classified into a category as yet.
SAVE & ACCEPT
Powered by